Hi everyone, today I will speak about a project which I loved doing during the last six weeks, DRUMS. To give you a quick idea of what’s about this project, the tag page of DRUMS can help you to know more about it !

Now you’ve learned more about DRUMS, I will add the context to it. I was in the project management team, and I had a title. I was the integrator. My duties was to be sure everything will work together with the specificty of our architecture (material and software). And with that, I was responsable of 2 teams, because just to be integrator was not enough (the little pleasure of titles).

The conception period was during the end of october to the beginning of january. This period was really hard because :

I was one of the last point, and I regret that. Why did I ? Few reasons :

I was no the only one who didn’t really participate to this period and we felt it during the development period, we had a software architecture document quite…, hum, how to say, useless, that’s the word.

The development period will begin with this architecture :

However this architecture can make us ask ourself some question which was solved only during the development period:

Some questions like that which deserve some response before the development period.

We used git for the versioning even if the project ownership adviced us to SVN. “Because, the students had a formation for this tool (LOL). The university give us 2 git repository, UI and webservices (back-end and front-end If you prefer).

For the first one, we used a system with 6 branches (which changed after). A development branch for every team + the master branch to deploy in production. The yellow team who was the integrator team UI, the yellow branch was the integration one.

For the back-end, it was a little bit more complicated. We used a feature branching system, where every functionality will be in a proper branch. And with that, every team had his own directory where they could create their own ones for every project. For Dimitri Baëli (@dbaeli), it was an over security, but it was really useful because the students was not used to git so, having their own branch will secure every team to the others one (we never know). And well obviously it was a security for me too, to win time to not solve every problem of git. About the deployment as you could see on the previous diagram, we had contineous integration. For the back-end, every functionality was deployed on the devlopment server (TOMCAT, my love). To put in production, I had a integration branch where I developped some scripts which gave me to do the integration in production through jenkins (merging, passing some variables to production environment, building all wars and deploying every war to the specific tomcat).

A little diagram to explay easily what I said in two paragphs :

This period has started and we still were modifying the software architecture document (normal). The first week was ok, the team was experimenting git (somes made few mistakes, nothing really important). However a question went from the team who was working on audio player, How we access to the data of the distant server ? Quick response : SFTP !!! So this team tried to add some SFTP to their webservice but they didn’t succeed :'(. Thinking few times, I realized a lot of team will need to access to files on the data server. So I created an API to solve this problem.

The second week was stressful. The full project was blocked, well the teams felt blocked because of the fact the API to communicate with the database was late. Teams were losing motivation, and the one who was developing the DB API was frustrated because of the unstopable remarks from the other teams (one for all, as you can see). With that, the both triple store on the data server was killing themself using too much ressources. So we had to delete one :(. One last question was asked : How we will share the APIs to the other team ? Two solutions :

The first solution was scaring me. The students had only half a day of formation about git, so they never really be confronted to conflict and merge problem. The second option was the only one really valid. Hopefully, we had a day to build a software factory (orchestretad by Dimitri Baëli), we learned during this module how important is a repository manager during a project (I invite you to read this article if you’re asking yourself what’s for) http://maven.apache.org/repository-management.html. I added to the integration server this repository manager (Nexus) which allowed us to share and deploy easily every version of the different APIs (so simpler than do few merges for every update of the APIs).

Third week, everyone started to be used to. Some absences started to be more and more frequent (even inside the project managing team). Some little integration problem and a DB API finally usable :). The streaming service was nearly finished when a problem came. Impossible to integrate the database API inside the streaming service. Why ? This one was developped by an other REST framework else than Spring data REST :'( :'( :'(. Apparently someone of the management team allowed him to use anything he wanted (who? We’ll never know). So the guy had to develop an other time his service using the good framework to integrate properly the database API. A lost of time which be able to miss, if the responsable of the team was watching properly this team (ME, LOL).

Fourth week. Tomcat started to be slow. He contained more than ten web services and deployment was longer every build. Teams started to be impatient. And even with the configuration I did for Tomcat to use more RAM, nothing changed for Tomcat, the only solution was to kill it when it started to be slow. An other problem appears, the web service to manage users alternate between the state of stable and unstable and that’s blocked the UI team who could not test the functionnality they were developping.

Fifth week, the last rush. Productivity multiplicated by twice. A lot of web services went finished and delivered :). Thursday, the “last day of development”. Tomcat was getting slower and slower, the UI team was rushing as they could for the integration of the services, even a night was planned to prepare peacefully the presentation the next day. If only… Tomcat died during the night. Destroyed by the weight of the webservices which were deployed in it. Accablé et détruit par le poids des web services qui lui ont été déployés :'( :'( :'( :'(. I left my brother in arm at 4:30am. TOMCAT WAS DEAD. THE DAY BEFORE THE PRESENTATION FUCK GOD NA SAKE (Sorry, how rough I am, but it was quite frustrating). During the night, we thought to deploy the webservices in the tomcat on the production environment. But it too was going to die. Well, the night was a little descent into hell.

Last day, Friday 27 of February 2015. I tried to wake myself up at 8:30am (lol). I woke up at 10:30am. A text message to the chief to know the current situation (we never know). PANIC. However all the staff of the university were trying to figure that out. The system administrator and the chief of the master. Even with these big names, tomcat kept beyond. It was only 12:30pm when I could solve the problem. Well, apparently it was me who destroyed the connection between tomcat of the production environment and the database (see previous chapter). (For them who knows, I add a connection inside the pg_hba.conf file of postgreSQL badly formatted (oups).). Weirdly, everything went fine after that. Integration with the speed of light, I throw all the webservices in production, the UI team continued to integrate what they could with the few time they had left before the demonstration. To make it harder, between two integrations we had to present our work and how the project works, it was a kind of big joke.

The demonstration, big suspense. EVERYTHING WORKED !! Only few webservices was not integrated but everything worked :) :) :) :).

Now, the question is : How we could avoid this last rush ?

But we will still have the problem of overabundance of the tomcat which happens during the third cycle. Havind a service oriented architecture; we could share properly the services between the both servers with a tomcat for specified environment. Knowing that our 4 servers was all full (data, integration, development, production), we could operate to this way : Deployment of the web service on the integration tomcat, and moving the web services stable to the development tomcat, and after deleting it to the development server and putting it into the production one when they were finished. We loose the copy style of the both server. However we gain in performance. About web services repartitions, it could be smart to create performance test to evaluate them and sharing fairly them between the both servers. So we will have this new architecture :

NB : We make sure the Apache server is configured to redirect every request to the proper tomcat.

Don’t forget we are in a universitary project, a hierarchy is hardly respectable. Some students didn’t hesitate to do what they wanted to do during the development time (we only asked for 7h/day), and they were saying it was because they work was done (…). A metric which could be really useful to respond to this lazy people was the code coverage. I didn’t have time to install a Sonar for it, and I regret it. The project manager team could say, a web service was not acceptable the time they didn’t do some percentage of code coverage.

For the motivation, we could install a little competition between students with a notation based on failed/success build, web services developed in time, code coverage, helping other team, etc… However, the problem of this technic is to loose the students who are quite bad or who are not competitive at all.

We had some problem about the quality of some web services during this project (ex : no indentation LOL). Develop a hook to stop students commiting shitty code could be a good idea. But I didn’t have time to develop a module for my pre-commit hooks (you can see that here : http://blog.juanwolf.fr/2015/1/git-hooks/). But the problem of the hooks is they are installed in the client (so in the machine of the developer), so the developer can avoid it :/. And I’m sure for more than 70%, the students will be in this situation : 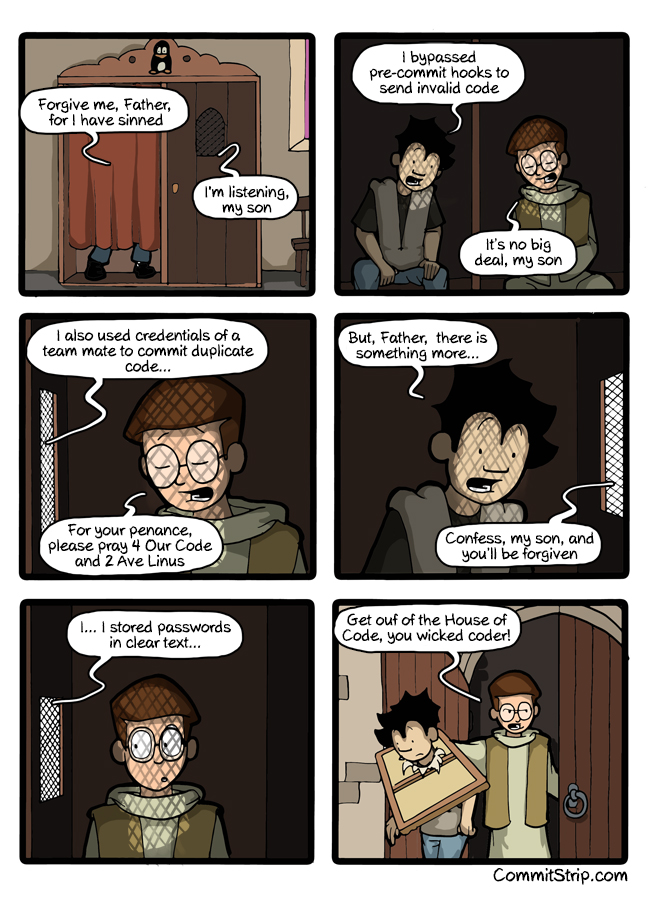 Setting up some code reviews on the code of every web services could be really useful to prevent every drift. Some students needs to be supervised if we want some quality in the code. So doing that for 1 or 2 times a week by team (to not discriminate a team to others) and we could avoid the drift like using an other framework or setting some id hardly in the code.

I finally finished, and you’re still here ? Impressive. I was devops / integrator / system administrator during this project, other point could be improved but I’m not the best one to talk about. Even some scaring times, this project was a really good experience. 5little time of advertising) This project was organised as part of the master 2 in Software engineering at the university of Rouen. Don’t hesitate to react if at some point it’s blurry or debatable! Ciao, et codez bien !